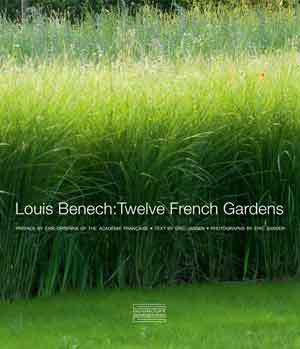 Préface by Erik Orsenna, of the Academy française

Louis Benech came to gardening through his love of plants. After studying law, he went to work at the famous Hillier Nurseries in England. Captivated by what he learned there, he returned to France to work as a gardener in a private garden in Normandy. In 1985, he began his career as a garden designer and landscape architect. Five years later he was commissioned, with Pascal Cribier and François Roubaud, to redesign the historic part of the Tuileries gardens.

Since then, he has designed and carried out some 300 projects, from Korea to Panama, via Canada and the United States. While most of his work has been for private individuals, he has also received commissions from large multinational companies such as Hermès, Axa and Novartis.

He has also worked on many established historic gardens, such as those at the Elysée Palace, the Ministry of Foreign Affairs on the Quai d’Orsay in Paris, the chateau of Chaumont on the Loire, and the Achilleion in Corfu. Recent commissions have included the gardens of the Archives Nationales in Paris, and the creation of a new garden in the Bosquet du Théâtre d’Eau at the Palace of Versailles.

In all of his projects, Louis Benech sets out to create a genuinely harmonious relationship between his landscape design and the natural and architectural setting of each site. Ideally, he would like this interface to be so subtle that no one would even guess that he had worked there.     Maintenance is one of his prime concerns, and he devotes particular attention to finding the most cost-effective ways of ensuring the continuity of his gardens.

In this elegant and accessible book, the photographer Eric Sander and the journalist Eric Jansen offer a portrait of Louis Benech’s gardens in all their beauty and subtlety.

Eric Sander is one of the most celebrated garden photographers of his generation. With its unique ability to capture the elusive qualities of light, his work appears regularly in exclusive magazines and books.

This book presents twelve French gardens designed by Louis Benech, from the Jardin du Soleil et des Nuages at the Château de Villandry to Square Nicolas Forestier in inner-city Paris, via an estate in the Sologne, a Normandy manor house, a Breton flower garden, an exotic oasis in central Paris, a project in the footsteps of Russell Page in Burgundy, and the gardens of the Château de Pange, officially recognized by the French Ministry of Culture as a ‘jardin remarquable’. In their wide diversity, these twelve gardens reflect the many facets of a remarkable talent that has earned Louis Benech worldwide recognition.